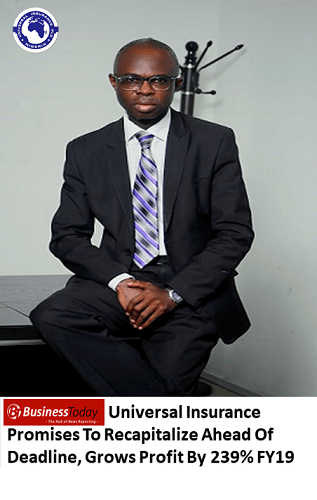 The chairman of the company, Lt. Gen. Joshua N. Dogonyaro disclosed this at its virtual 50th Annual General Meeting held today that the board of directors are working strenuously to conclude well ahead of the new deadline set by the commission.

He said that the option of acquisition of one or more smaller players/ a merger arrangement is the very top on its priority and the board is working tirelessly to actualize this.

He reassured that the recapitalisation exercise will not only be a successful one but also one that will see the company grow bigger, stronger and continuously delivering the unique Universal brand of service to the public.

On its operating results for 2019, the chairman said the company displayed the ability to consistently post positive result in both the top and bottom lines of its financial year results.

The company’s financial indices shows a growth of 239% in profit after tax moved from a loss position of negative of N46,673million to profit position of positive if N65,073million an increase of